Posted on June 4, 2018 by technologyquestions

On the face of it, JustAnswer would seem to have a lot of what we’re looking for.

But there are two problems with it.

Firstly, it doesn’t seem to give you a choice as to which “expert” you consult. We have just gone to their website, and this is what has come up quite randomly. 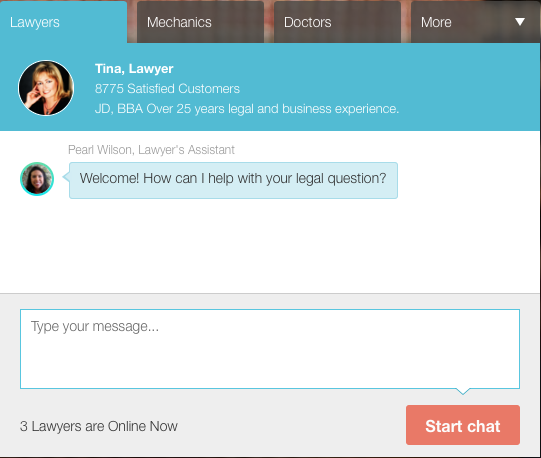 It says that “3 Lawyers are Online Now,” and it has a photo of a lawyer, Tina, at the top, who is said to  have 8775 “Satisfied Customers,” but goodness knows why, because it doesn’t seem that you can consult her – the only person it seems you can consult is a “Pearl Wilson,” who’s described as a “Lawyer’s Assistant.”?????

The whole emphasis is on being able to consult someone NOW and it’s supposed to be good enough for you to consult someone that JustAnswer has vetted. To us, in 99 cases out of 100, we want to get our answers from people we have grown to respect and trust, even if it takes a week!

Secondly, before they do anything, you are asked to pay $5.00 upfront, and while this is a nominal amount, in paying it you provide details of your Credit Card, PayPal etc account which enables them to take further amounts as they see fit, and stories abound on the internet of customers claiming that they have taken money they shouldn’t have taken. It seems that if you complain enough about them doing this, they may refund monies they shouldn’t have taken, but they rely on the fact that lots of people can’t be bothered complaining enough. There is nothing wrong with them asking for some money upfront, but ideally you should be able to pay this without putting them in a position where they can take whatever further monies they feel like taking.

We don’t claim to know too much about JustAnswer – perhaps readers could share their experiences. But, above all, we feel that when there are so few “experts” that we know from our own experiences that we can really trust, we should be able to consult them, if appropriate.

We think that people who have even 8 people around them that they truly respect and trust to advise and inform them – and with modern technology, those people can be on the other side of the world – are the luckiest people in the world!

This entry was posted in Uncategorized. Bookmark the permalink.